What to do about oil spots on concrete floors? 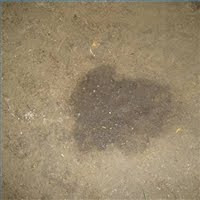 Oil based liquids will only evaporate if the surface is treated with heat or sunlight (still takes a long time, months or even years) Therefore, interior surfaces contaminated with oil will be be especially problematic if you are trying to coat them. The trapped oil will act like a "bond breaker" or a repellent to coatings. This could be oil-spots or entire areas.

There is one solution if you desire to cap the unsightly contaminated floor, Oil Stop Primer. Oil Stop Primer, a (2) part epoxy, is coal-tar based. Therefore, the oil in your concrete will not have the same effect as it would on a standard primer or coating. It will act favorably enough to complete the adhesion process.

Once the primer has cured the applicator will need to apply several top-coats of a polymer based coating to cover the primer's black color. The end-result is an attractive floor that no longer presents a danger to pedestrians.
Posted by LegacyIndustrial at 3:13 PM No comments: 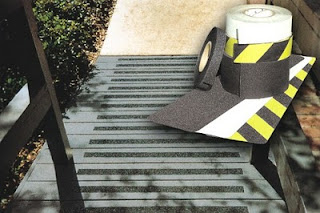 The fastest and easiest way to make conditions safer and more productive is to apply a non-skid tape. These tapes have come a long way in the past few years. Advances in the materials used to manufacture and the adhesive backings have turned a once necessary evil into a real option.


A few facts about today's anti-skid/non-skid tapes:
Lastly, you won't find good skid-tapes locally, make a Google search for Flex-Tred, it's the best.
Posted by LegacyIndustrial at 5:03 PM No comments: 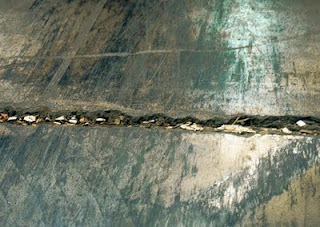 Concrete slabs require joints. These joints, in most cases should be filled to prevent edge break-back and bacterial growths.

From: The Concrete Network: Concrete is not a ductile material—it doesn't stretch or bend without breaking. That's both its greatest strength and greatest weakness. Its hardness and high compressive strength is why we use so much of it in construction. But concrete does move—it shrinks, it expands, and different parts of a building move in different ways.

This is where joints come in. Joints allow one concrete element to move independently of other parts of the building or structure. Joints also let concrete shrink as it dries—preventing what's called internal restraint. Internal restraint is created when one part of a slab shrinks more than another, or shrinks in a different direction. Think how bad you feel when part of you wants to do one thing and another part wants to do something else! Concrete feels the same way.

Although many building elements are designed and built with joints, including walls and foundations, we'll limit this discussion to joints in concrete slabs. In slabs, there are three types of joints:

The fastest (sets in one hour), cleanest (no mess, promise) and strongest solution is a (2) part urethane based cartridge filler. These cartridges require a specialized gun (not a caulk gun). Once loaded, you shoot the material into the joint. After one hour you level the joint with a razor scraper (optional) and it's done. These urethane fillers will flex enough to stay in place, yet are strong enough to resist fork-truck wheels pushing down on them. Lastly, they may be your only option for cooler and freezer floors as they are not affected by cold temperatures the way epoxy fillers are.

Posted by LegacyIndustrial at 4:08 PM No comments: 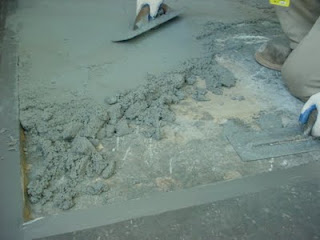 I was walking with a customer a few months ago. This particular customer runs a small distribution center for a multinational snack manufacturer. The name of this company has been left out. However, it rhymes with Trito-Mays. You get the picture.

He had floor problems in his aisle ways. Two slabs intersected at an expansion joint. They had both been sinking creating a low spot. This low spot has been eating fork-truck tires and had begun to fall apart, creating a deeper void.

I asked him what he had been doing about it. He told me that his "handyman" patches it every other month and he keeps his fork-truck company in business with replacement tires. I asked him what these problems were costing him per month. He replied, "probably $1000.00 per quarter".

We visited him this week. He was thankful for the advice. His budget was thankful also.
Posted by LegacyIndustrial at 5:44 PM No comments: 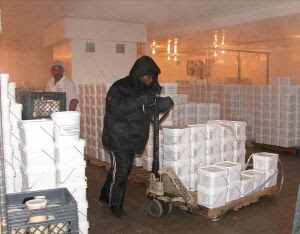 So you have a cooler or freezer and the concrete floor is damaged. Probably near the entrance or where (2) slabs intersect.

Repair products using water are out. A water based product is going to either freeze before it cures or will not hit it's peak strength before a fork-truck runs over it. Not good.

Well, even if you could raise the air temperature, the floor temperature would lag about (2) days behind as concrete slabs change temperature very slowly. I hate to break this to you all but fork-truck repair companies mark tires up approx. 60- 70% + installation.

Your best bet is an epoxy repair patch designed to be used in coolers or freezers. They are formulated for fast cure and high early strength. Remember, moisture in a cooler/freezer is your enemy, that goes for the patch you use too.
Posted by LegacyIndustrial at 5:37 PM No comments:

Can you resurface a wet concrete floor? really? 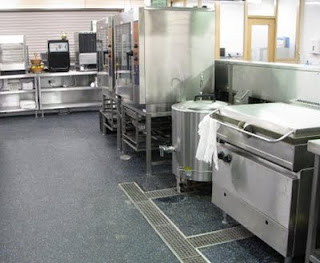 There is a sector of the industrial marketplace that needs to resurface or repair concrete floors. However, these floors are in areas that are wet and can't be fully dried for a multitude of reasons. Mostly, they can't give up the area long enough for the drying to occur.

In the past, they have:

Today, there are some options for these folks. Floor coating companies have developed water based epoxy products that have been mixed with portland type materials. When combined into a slurry they can be applied to wet and cool floors easily and with positive results. This breakthrough has saved many a food plant from audit infractions and the risk of being shut down.
Posted by LegacyIndustrial at 3:42 PM No comments: